Fraternity houses are centers of male bonding. This bonding occurs via various vehicles, but one that I think we all have in common is video games. As any of our composite photographers will tell you, walking into a Fraternity house for a photo shoot will often put you in the middle of an intense Mario Kart match. And although these ‘retro games’ (and I use that term loosely) are common, I’d venture to say that the most common game among Fraternity brothers is Call of Duty.

I can personally say that I have logged countless hours playing Call of Duty, or CoD, with my Fraternity brothers in my undergraduate days. Our game mode of choice was team deathmatch, but who could forget about zombies? Not only does playing online build camaraderie and teamwork, but there is also a healthy competition that plays a big part in the friendships of brothers. And who can forget the trash talking? Nothing is more important for brotherhood among Fraternity members than trust and reliability. Although brothers may disagree and argue from time to time, there is that fundamental level of trust that shines through. This level of trust doesn’t happen overnight, it takes living together and bonding on a daily basis to achieve. Some people may see video games as a childish waste of time, but I see them as an integral tool that I used to strengthen the bond with my Fraternity brothers. 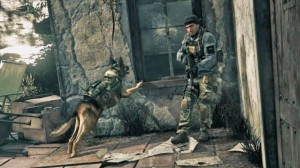 We are currently on the verge of next generation gaming consoles (Xbox One and Playstation 4) and on the forefront of this revolution (for CoD fans, at least) is the newest member of the CoD family, Call of Duty: Ghosts. Ghosts is set to release on November 5th, 2013, coinciding with the Xbox One’s release date of November 2013. The newest CoD has many upgrades and changes from the last game, including a canine companion names Riley (sounds like a loyal Frat hound to me). So whether you are going to choose Xbox One, Playstation 4, or buy the new CoD for your current game console (it will be offered on both current consoles and the next generation consoles) you can rest assured that Call of Duty: Ghosts will continue to serve as a staple of bonding in Fraternity houses nationwide.

This site uses Akismet to reduce spam. Learn how your comment data is processed.