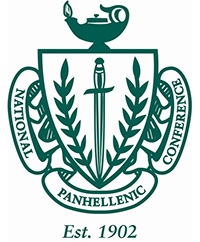 The main reason I decided to go Greek was to be a part of something that was greater than myself. Joining a Sorority has allowed me to grow, learn, and make an impact in my community. As a potential new member it is important to keep a open mind during the recruitment process. It is easy to get caught up in the stereotypes and negative stigma associated with each house. Recruitment is both an exciting and nerve-racking process. You are about to embark on a journey much greater than you imagined. When joining a Sorority, you are not just becoming a member of your particular chapter, you are becoming a member of the National Panhellenic Council.

Panhellenic is an umbrella organization that makes up one-third of the Greek community. Along with the InterFraternity council (Fraternities) and the National Pan-Hellenic Council (Historically African Americans Fraternities and Sororities), Panhellenic governs over all of the 26 Sororities by establishing standards and guidelines for all to uphold. Panhellenic is one of the largest organizations for women in the world with over five million members. Panhellenic is similar to a Sorority, simply on a larger scale. It has members from every Sorority and even has its own philanthropy! Panhellenic’s philanthropy is the Circle of Sisterhood, which helps provide schooling for women in underdeveloped nations.  So far, Panhellenic women have raised over 13 million dollars to the Circle over Sisterhood. It is truly amazing to be a part of the Panhellenic community that has, and continues to make huge contributions in the world.